Recap / Big Finish Doctor Who 029 The Chimes Of Midnight 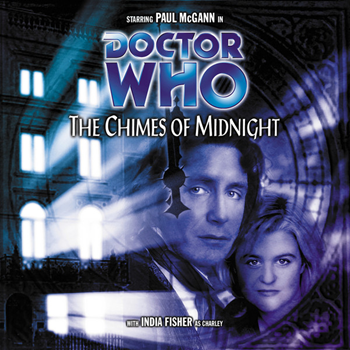 'Tis the night before Christmas, but deep in the house, a creature is stirring who's not Mr. Klaus. *GONG*
Advertisement:

One of the classics of the Big Finish Doctor Who audios, Steven Moffat's favourite Eighth Doctor episode, and a strong contender for one of the best Doctor Who stories in any medium.

It's an Edwardian Christmas Eve in 1906, and the servants at an English manor prepare for the holiday. Amid all the cooking and cleaning and preparing, scullery maid Edith is getting picked on by the other servants: cook Mrs. Baddeley, lady's maid Mary, and chauffeur Frederick. Even the butler, Mr. Shaughnessy, is getting his licks in. Edith is dumb, uneducated, unpopular, "a nothing, a nobody". While she cleans the pots and pans, everyone else in the house is looking forward to Mrs. Baddely's delicious plum pudding. Christmas wouldn't be Christmas without one of her plum puddings.

The TARDIS parks herself in complete darkness. Charley and the Eighth Doctor head out to investigate, and after some initial scares, they realise they're in the scullery of a dark and deserted English manor house on Christmas Eve. The washing-up water is still hot, the plum pudding's still in the oven, and the table's all laid out — but there's no one around. Oh, and time appears to be frozen. But Charley can hear Edith singing, and she can hear a scream...

Time unfreezes enough to let Charley and the Doctor enter the same continuity the servants inhabit. In this world, they're the Doctor of Scotland Yard and his plucky young niece. Edith is murdered and found standing upright with her head in the sink. Although the servants insists it must be suicide, the Doctor notes that it's really extraordinary difficult (to the point of impossble) to drown oneself while standing up. Edith's colleagues insists that she must have simply been too dumb to know it was impossible. Mary (who's sleeping with Frederick) is demoted to scullery maid to fill in for Christmas. Frederick can't love her now, of course. Who could ever love a scullery maid? She's nothing, a nobody. Mrs. Baddely, meanwhile, feeds Charley her plum pudding. Her favourite plum pudding. Christmas wouldn't be Christmas without one of those plum puddings. And Mrs. Baddely's plum puddings were always Charley's favourite, ever since she was a little girl.

Twenty minutes after ten, when the clock chimes eleven, Mrs. Baddely is also murdered — stuffed full of plum pudding. And no one remembers Edith anymore. But Charley can hear Edith's voice reverberating, begging Charley to remember her. Edward Grove is alive. There will be a third murder at midnight.

The victims won't stay dead... and, come to think of it, have oddly flexible ideas about what roles they (and the Doctor and Charley) have to play in the murder mystery. Edith is murdered again, this time suffocated with a plunger. Frederick is the next victim, run over by his own car. Inside the house. When the Doctor tries to leave the house or go upstairs (to where His Lordship and Her Ladyship supposedly live), the servants immediately try to kill him. They happily back down again when he stops trying to leave, and go back to their roles in the story. Charley, herself a native of upper-class Edwardian England, is particularly suited to the designs of whatever entity is running this dumbshow. It wants something from her... but what?

As time warps, twists and reverts itself around the Doctor, he quickly realises that the Lotus-Eater Machine is toying with him. He's not allowed to leave the World Limited to the Plot. But he does, because he's absolutely terrified, and heads off into the TARDIS, where there's another scullery waiting for him. And inside the scullery, another TARDIS. Edward Grove is alive. Edward Grove is the house.

The Doctor coaxes the house into coming out and talking to him through Mr. Shaughnessy. But Charley is trapped on the other end of the time barrier, together with Edith (now twice dead), who's still begging Charley to remember her. And then, it finally turns out that Edith was the cook in Charley's house when she grew up. Having served at Edward Grove in 1906 as a scullery maid, she was always picked on, always ignored, a nothing, a nobody. But when she was eventually hired as a cook by Charley's father and moved into their home, there was always one person who remembered her name, someone who cared: little Charlotte Pollard. Charley always loved Edith's plum pudding. Christmas wouldn't be Christmas without one of Edith's plum puddings. And when Charley died in the R101 crash, Edith had nothing left to live for, and she slit her own wrists with a kitchen knife.

But Charley surviving the R101 crash upset the time stream so heavily that Edith's death (now rendered meaningless) gave birth to a sentient, malevolent time stream energy that feeds on constant death. It took residence in (or rather, as) Edward Grove: the house where young Edith envied the lady's maids, got abandoned by the chauffeur, aspired to be a cook, was bullied by the butlers.

The Doctor, meanwhile, has realised most of this. And in desperation, he resorts to what his Seventh incarnation was most notorious for: Talking the Monster to Death. He tries to convince Edward Grove to commit suicide, so that his victims will be set free. When Edward refuses, the Doctor, absolutely scared out of his mind, devises an even more extreme last-ditch attempt to contact Charley beyond the veil of the time barrier: he commands Mr. Shaughnessy to grab his throat and strangle him.

And it works — now dying, the Doctor is able to cross the time barrier and talk to Charley. But Charley has never met the Doctor. She died in the R101, so Edith's suicide could have meaning. She remembers the crash, the flames, the bodies around her. With great effort, the Doctor eventually gets through to Charley, and Charley chooses life, finally vanquishing the house's consciousness.

Before they leave, the Doctor and Charley drop by in 1906 proper, where young scullery maid Edith is scrubbing the pots. They tell her she's not nothing, not a nobody, and that she's actually quite wonderful. With that, they leave — the Doctor still very scared, and Charley now having to live with the Double Consciousness of fully remembering both her rescue and her death. This will come back to bite them.

Christmas just wouldn't be Christmas without any tropes!