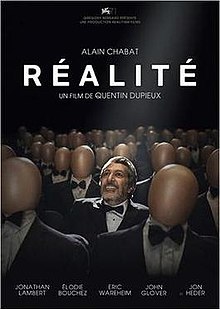 Realité is a 2014 comedy-drama by Quentin Dupieux that is mostly about making movies. It is quite absurd and plays with the idea of reality so it is hard to tell what actually happens in a way that makes sense, but it mostly follows two characters:

The action is set in what seems to be California, but several characters are native French speakers who live there; they speak French between them, but much of the film is in English.