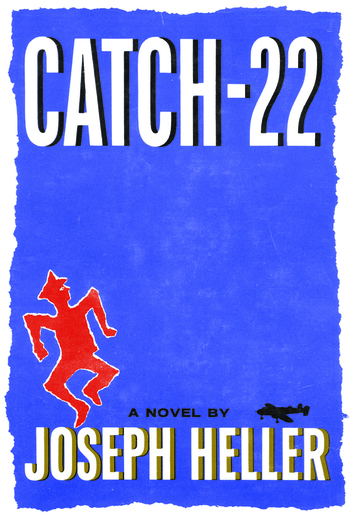 "That's some catch, that Catch-22."
"There was only one catch and that was Catch-22, which specified that a concern for one's own safety in the face of dangers that were real and immediate was the process of a rational mind. Orr was crazy and could be grounded. All he had to do was ask; and as soon as he did, he would no longer be crazy and would have to fly more missions. Orr would be crazy to fly more missions and sane if he didn't, but if he was sane he had to fly them. If he flew them he was crazy and didn't have to; but if he didn't want to he was sane and had to."
Advertisement:

The plot mostly consists of an assortment of random events on base, shifting focus across several characters, but mostly focusing on the main hero Yossarian. Most events highlight the absurdities of life, especially government and war. Many details that seem random become significant later on, often with much darker implications.

This novel originated the expression "catch-22" to describe a no-win situation or a double bind. The number 22 itself has no actual significance and seems to have been chosen arbitrarily. The original title was Catch-18, and that didn't have any significance either. It was changed so as to avoid confusion with Leon Uris' Mila 18, which was published shortly beforehand.

A 1970 film adaptation, directed by Mike Nichols and featuring an All-Star Cast, was a commercial and critical flop. There was also a 1973 TV pilot made with Richard Dreyfuss as Yossarian, but it was never bought. A sequel, Closing Time, was written by Heller and published in 1994. It flopped as well. In 2019, a six-episode miniseries adaptation of the book was released on Hulu.

For the type of no-win situation the phrase "catch-22" has come to refer to, see Catch-22 Dilemma.

This book provide examples of the following tropes: