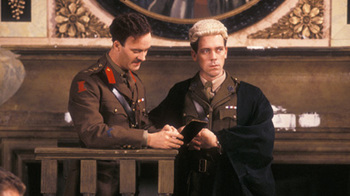 The Whig's a fake, by the way.
"The Federation may establish military criminal courts for the Armed Forces as federal courts. They may only exercise criminal jurisdiction while a state of defence exists, and otherwise only over members of the Armed Forces serving abroad or on board warships. Details shall be regulated by federal statute. These courts shall be within the competence of the Federal Minister of Justice. Their full-time judges shall be persons qualified to hold judicial office."
— Basic Law for the Federal Republic of Germany (Art. 96(2))
Advertisement:

Sometimes, a soldier doesn't respect the law and/or his orders; other times, someone under military jurisdiction, such as a civilian living in a zone under anarchy or working for the army, ends on the bad side of the law.

In both cases, they end up court-martialed.

Military courts have a reputation for harshness, and in portrayals of authoritarian states, they are used as a background effect, especially when used against civilians; Hanging Judges can end up serving as judges in these.

Among the outcomes of these courts are Shot at Dawn and Insignia Rip-Off Ritual.

In fiction, this is often played as a particularly dark take on the Kangaroo Court.

Historically, a court-martial may not only be held to determine someone's guilt, but also to verify their innocence and officially clear their name. This was a fairly common outcome for Captains who faced court-martial for the loss of their ships. It also wasn't unheard of for a disgraced officer to request a court-martial, in hopes of clearing their name in a court of law. Note that most navies have a standard court-martial which convenes whenever a ship is lost; this does not presume that the captain is suspected of wrongdoing, but merely that the circumstances surrounding the loss of the ship be made part of the official record (in fact, some captains saw their careers harmed or even effectively ended - because they didn't have a court-martial for an official record). These are called a "court of inquiry" usually as their role is not try a defendant on any charge but to investigate. If some evidence is found that implicates anyone with a crime, then another court-martial would conduct a trial for that.

The inevitable intersection of a Courtroom Episode and Military Fiction. May also take place in a Law Procedural dealing with the military.