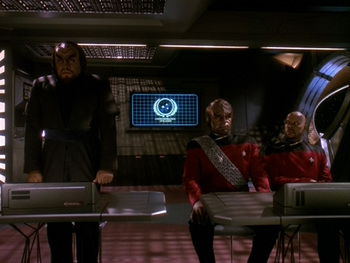 Worf goes on trial. We should all be so lucky to have Ben Sisko as a lawyer.
Commander Worf is on trial. The cause of which is to establish motive in a horrible tragedy. In the heat of battle, did he purposely fire on a transport ship full of innocent civilians? Or was it simply a case of reflexive action in a heated situation?