Series / Enemy at the Door 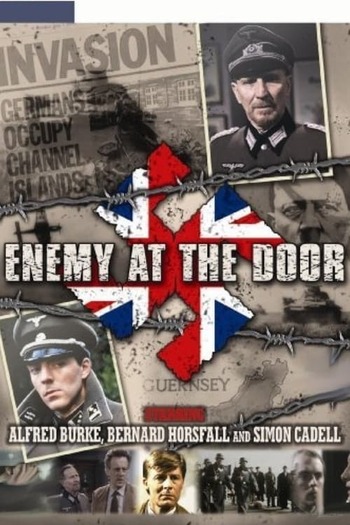 Enemy at the Door is an ITV drama series that ran from 1978 to 1980. It was set on the Channel Island of Guernsey during World War II, and opens in June 1940 as the island is occupied by German forces. It consists of a mixture of one-off stories and ongoing plotlines exploring the difficulties of life in occupied territory.

The main point-of-view characters are the Martel family. Philip Martel (Bernard Horsfall) is a local doctor, and in the first episode he is invited to be the medical representative on the Controlling Committee that will run the island's civilian government services and liaise between the Germans and the local population. As the series progresses he also gets involved in other goings-on either because his professional services are required or because the people involved are family friends. The Porteous family, local land-owners, are also regulars; Martel's daughter Clare and Helen Porteous' son Peter are romantically involved, and occasionally collaborate on acts of resistance against the occupiers.

Deciding what constitutes correct behaviour in the circumstances is shown to be a disputed issue among the Germans as well as among the locals. Regularly-appearing German officers include Major Richter (Alfred Burke), the garrison commander of the occupying forces on Guernsey; Major Freidel (Simon Lack), the feldkommandant (governor of the occupied territory); Hauptsturmführer Reinicke (Simon Cadell), the ranking SS officer on the island; and Oberleutnant Kluge (John Malcolm), who brings peacetime experience as a police detective to his role keeping (the German interpretation of) law and order. The second season introduces Generalmajor Müller, the commander of all German forces in the islands, and sees Richter and Reinicke Rank Up.

Not to be confused with Enemy at the Gates.