Series / The End of the F***ing World 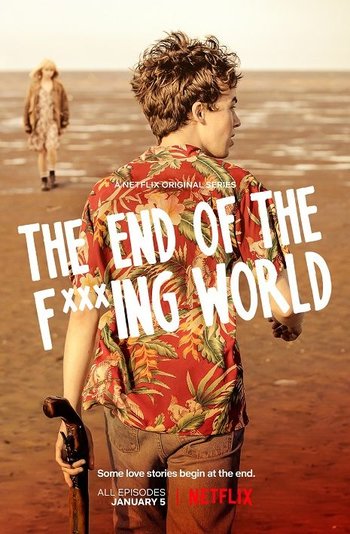 I'm James. I'm seventeen. And I'm pretty sure I'm a psychopath.
Sometimes, everything is suddenly really simple. It's like everything shifts in a moment, and you step out of your body, out of your life. You step out and you see where you are, really clearly. You see yourself, and you think: "Fuck. This. Shit."
—Alyssa
Advertisement:

The End of the F***ing World is a British Black Humor Romantic Comedy about two wayward teens who run away together and get into a string of outlaw adventures while struggling to find their place in the world.

Jessica Barden stars as Alyssa, a surly spitfire who hates just about everything. Alex Lawther stars as James, a quiet loner who suspects that he might be a psychopath. Season two adds an additional main character, Bonnie (Naomi Ackie), an unbalanced woman who holds a grudge against the main pair.

Based on a comic miniseries by Charles Forsman, the show premiered in 2018 on Channel 4 in the UK and Netflix internationally. It has aired two seasons.

The End of the F***ing World provides examples of: