Let the Past Burn 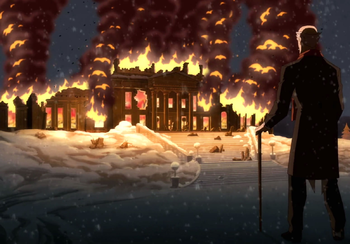 Sometimes, a house or other building is central to a story. Usually it is the residence of the protagonist or antagonist. It may have a significant history, either special or sinister. It may even carry a family curse. By living there, a character may be unknowingly tying themselves to the past, or to their old ways.

Then that building is burnt down, destroying those memories of the past with it.

The huge material loss suffered by the owner of the house is generally peripheral to the story, with the real point of the trope being that the fire symbolizes letting go of the things from the past that were tied to the house, and being able to finally embrace the future.

One or more characters, dead or alive, may be burnt along with the house. A villainous or deranged character who lights such a fire is likely to perish in this way - perhaps with the hero trying unsuccessfully to save them.

This trope is almost always an Ending Trope, as it gives an effective close to the story and symbolically lays the past to rest. Tends toward a Bittersweet Ending. It is used particularly in Gothic Literature.

Simply having a previously unmentioned or unimportant house burn down is not sufficient for this trope. Examples should make clear the value of the building and/or the significance of the fire, to avoid being considered a Zero-Context Example.

Related to, but distinct from, Kill It with Fire and Fire Purifies, which are about fire as a weapon for killing. Also related to Burn Baby Burn, which is about burning smaller significant objects. See also It's All Junk. Destroy the Abusive Home is a subtrope of this which has a character destroying the home or other place where they or a loved one were put through hell. Where I Was Born and Razed is about a character pulling this trope (and maybe even expanding it into a whole Doomed Hometown) For the Evulz.