Literature / The Woman in White 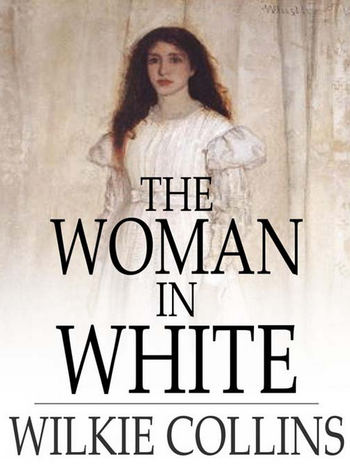 Walter Hartright, a young drawing master from Victorian London, gets a job teaching art to two young women, half-sisters Marian Halcombe and Laura Fairlie, at Limmeridge House in Cumberland. On the night before he takes up the position, he encounters a mysterious woman in white. He tries to help her, but she runs away. Upon arrival, he discovers that the Mysterious Waif is an escaped mental patient named Anne Catherick, and that Anne bears a striking resemblance to Laura Fairlie. Walter and Laura fall in love, but she has been promised in an Arranged Marriage to local nobleman Sir Percival Glyde. However, nothing is as it seems, and a dark conspiracy is being hatched.

The book is often considered the first Victorian sensation novel. It has been adapted many times: a play, several films (at least five films just in the silent era, as well as a 1948 film from Warner Bros.), two different BBC television adaptations, an Andrew Lloyd Webber musical, and a much Lighter and Softer PC game

Tropes found in the 1981 Soviet film:

Tropes found in the 2018 BBC adaptation: