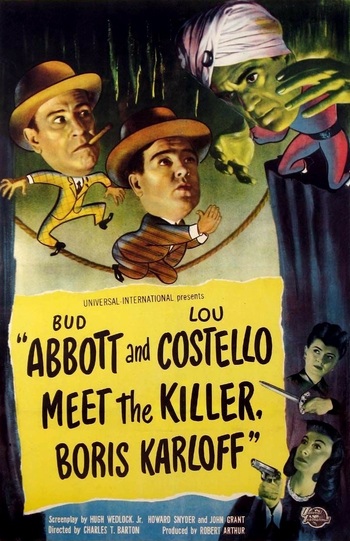 Abbott and Costello Meet the Killer, Boris Karloff is a 1949 horror comedy starring Bud Abbott and Lou Costello, and co-starring (who else) Boris Karloff.

The film was originally written with famed comic actor Bob Hope in mind, but after Universal purchased the script, they retooled it to star their own high-earning comedy actors. For a time in preproduction, it was titled “Abbott and Costello Meet the Killers”, but it was renamed after Boris Karloff was hired five days before shooting.

House detective Casey Edwards (Abbott) and hapless bellboy Freddie Philips (Costello) work at the Lost Caverns Resort Hotel. When famed criminal attorney Amos Strickland checks in, he gets in a fight with Freddie, and gets him fired. Freddie finds his murdered body, and he certainly looks guilty of killing Strickland himself – he took Strickland’s bloodied handkerchief without thinking about it, and the gun used to kill him was found in his bedroom. Though Casey tries to clear his name, even going so far as to plant the gun elsewhere, police inspector Wellman and Sgt. Stone keep Freddie in his hotel room while they investigate. However, there are 8 more suspects in the case at the hotel: Strickland’s secretary Gregory Milford, and 7 of Strickland’s former clients, including the sinister Swami Talpur (Karloff). Apparently, Strickland was about to publish his memoirs, and said clients are more than a little hesitant for their criminal pasts to come out into the open. All of them are willing to let Freddie take the fall for the murder, especially since Angela tricked Freddie into writing and signing a confession note that the former cons now have… but the only way they can make sure Freddie doesn’t refute the note is if he’s dead.

The film is generally seen as a fairly well-made, solid movie, leaning more towards a straight parody of Film Noir than Abbott and Costello’s usual silliness with murder mysteries and horror movies, and today it’s often looked on as something of an underrated gem.

Fun fact: the film still holds the Hollywood record for having the most actors’ names in the title of a single movie.

Casey: What happened?
Freddie: Well, he asked for a smack, so I gave it to him.