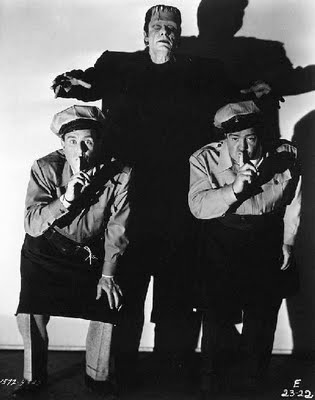 Our heroes are in a pickle now!
Advertisement:

Detaching itself from the continuity of the previous Universal Horror films, this movie centers around the cowardly Wilbur (Costello) and his no-nonsense buddy Chick (Abbott), who work as baggage clerks. One day they receive an order to take two boxes, which have just come from London to the States, to McDougal's House of Horrors. The boxes contain the purported remains of Count Dracula (Bela Lugosi) and Frankenstein's Monster (Glenn Strange), who turn out to be very much alive and soon escape the place... after scaring Wilbur out of his wits, of course.

Seems Dracula arranged this little charade to come abroad in hopes of getting a newer, more obedient brain for the Monster. He is working with scientist Sandra Mornay (Lenore Aubert) to accomplish this task, and she has found the perfect candidate for the "donation": Wilbur.

But that's not all; Larry Talbot (Lon Chaney Jr.), The Wolf Man himself, soon joins our heroes to stop Dracula. Too bad he happens to turn into a werewolf at the most inconvenient times...

One of the favorite films of Quentin Tarantino, who's noted that its successful genre-blending helped inspire his own style. It also proved a turning point for the comedy duo, whose film series would get further into fantasy, often with other Universal Horror monsters.

Here's something to laugh at: