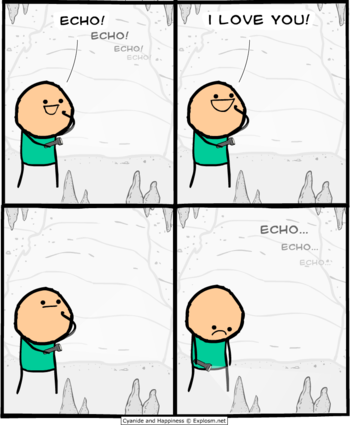 Doofenshmirtz: Ah, Perry the Platypus. Welcome to my evil space station!
Echo: Station! Station! Cookie! Station!
Doofenshmirtz: Wait, did you hear that? That "cookie" part? I think my echo is broken. I really do.
— Phineas and Ferb, "We Call It Maze"
Advertisement:

Someone notices that the room or canyon they're currently in has a great echo. They shout and get the expected reply. Then they shout something that the echo either refuses to repeat or replies to.

This is frequently acknowledged by the person being echoed. A broken echo always follows the Rule of Funny. This is a completely unrealistic trope as an echo is a property of acoustics and in reality, cannot be altered from its original source, or it's not an echo.

Not to be confused with an Ironic Echo or Meaningful Echo, which are not literally echoes and are instead someone repeating the words someone else said.

My echo is broken

Looks like someone has a strange echo! (Echo echo echo giraffe echo)

My echo is broken

Looks like someone has a strange echo! (Echo echo echo giraffe echo)