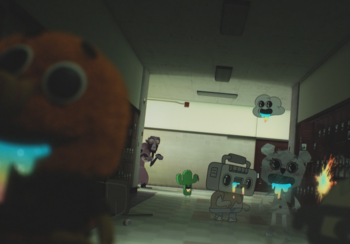 It's a Zombie Apocalypse...with rainbows and hugs!
"YOUR MOTHER ATE MY DOG!" note Not all of it.
— Paquita, Braindead
Advertisement:

Lightmare Fuel is when Nightmare Fuel is Played for Laughs or your genuine laughter is coming from the scariest of places. In short, it is the perfect combination of the truly scary with the truly funny. This often happens in comedy works, typically Black Comedy, but can just as often occur in horror stories.

A work of this nature will sit around the center of the Sliding Scale of Comedy and Horror.

A Sub-Trope of Mood Dissonance. Compare Faux Horrific, Bloody Hilarious, and Bathos, which similarly involves a juxtaposition of the serious and the silly but with less emphasis on horror. Not to be confused with Daylight Horror, which is when genuine horror happened in broad daylight.