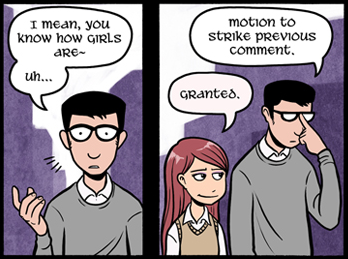 A character with a big mouth says something stupid or, better yet, self-incriminating, often with the subject of their commentary standing nearby or, better yet, right behind them.

The trope name comes from the phrase "to put your foot in your mouth" (also playfully referred to as "foot-in-mouth disease", a pun on the very serious livestock illness "foot-and-mouth disease").note Which in turn is not to be confused with the rather less serious hand, foot, and mouth disease

, which primarily afflicts small children and is generally speaking a week's nuisance at worst.

A subtrope of Fee Fi Faux Pas and closely related to Ignore the Disability.

Compare Shutting Up Now for a similar reaction. Can lead to any of the following: Change the Uncomfortable Subject, Digging Yourself Deeper, Did I Just Say That Out Loud?, That Came Out Wrong. Sometimes more than one.

Don't confuse for "Open mouth, insert food", as if this is about eating.

Linc realizes too late Mrs. Johnson has returned to teaching and accidentally compliments her.

Linc realizes too late Mrs. Johnson has returned to teaching and accidentally compliments her.