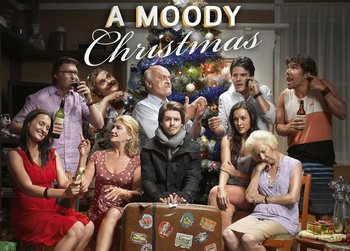 A Moody Christmas is an Australian comedy that follows Dan Moody as he returns home from England each year to spend Christmas with his dysfunctional family. The series was written and created by Trent O'Donnell and Phil Lloyd, and directed by Trent O'Donnell. It stars Ian Meadows, Patrick Brammall, Jane Harber, Danny Adcock, Tina Bursill, Rachel Gordon, Phil Lloyd, Robina Beard, Darren Gilshenan and Guy Edmonds.

The series was popular enough that a sequel has been made called The Moodys.

Adapted in the U.S. as The Moodys' Christmas by Fox in 2019, a three-episode miniseries that covers one holiday season.

A Moody Christmas contains examples of: