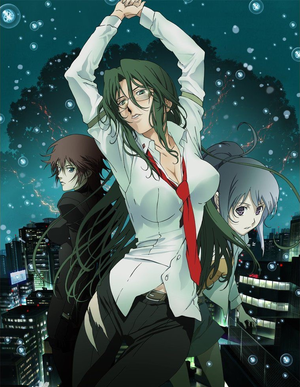 Also known as Mnemosyne no Musume-tachi (Daughters of Mnemosyne) and marketed in the United States as Rin -Daughters of Mnemosyne-, Mnemosyne is a six episode anime television series and light novel produced by Xebec that follows private investigator Rin Asougi, a member of the Always Female immortals, as she takes odd jobs and tries to avoid the mysterious connections to her past, while fighting against the sinister Always Male angels and their leader, Apos.

All in all, the series is a seinen taken Up to Eleven, featuring nigh everything older male audiences' hearts may desire: sexy girls, respectable guys, Mind Screw of a plot, alcohol, blood, and a considerable amount of sex in all flavors. Be prepared to wince a couple of times, though, as the series often blurs the line between its sex and violence, and fully exploits its main character's immortality to put her in situations that often lead to what would be the end of a horror story.

Often confused for an OVA, thanks to its risque content, monthly airing rate, and modest episode number, when, in fact, it aired on AT-X network, whose tenth anniversary it was to commemorate.