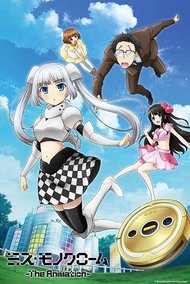 Meet Miss Monochrome. An android living in a posh castle with her assistant Mana, and vacuum/Robot Buddy Ru.

Monochrome wants to find a mysterious girl who she repeatedly dreams about. To do that, she decides to become an Idol. Making Mana her manager, she gives her 19.3 Billion Yen to make her an Idol.

And Mana instantly vanishes with the money. Monochrome loses her castle, and meets a convenience store manager named Maneo on the streets. Well, a manager is a manager. So Monochrome makes Maneo her idol manager, and gets a job at the store while trying to achieve famed idol status.

Miss Monochrome is the invention of VA Yui Horie, designed as a virtual character to sing at her concerts. After becoming a popular merchandising mascot, she received a 13 episode, 4 minute episode anime in Fall 2013. A second season, with the episode length increased to 9 minutes, was released in Summer 2015.

The first season has been dubbed into English (which is rare for an anime short series, especially one that hasn't been licensed for home video release) by Bang Zoom! Entertainment. Both dubbed and subtitled versions of the series are available on Crunchyroll