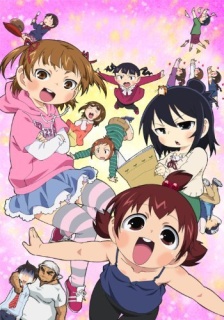 Satoshi Yabe has become an elementary school teacher, assigned to class 6-3. The school nurse is cute and the job shouldn't be too much of a problem. Except that he got the class with the most troublesome sisters in the whole school - the Marui triplets. All of them are perverted, rambunctious and prone to causing trouble, and it's his job to teach them. Though the rest of the class is only slightly less insane...

Mitsudomoenote  Three-Way Struggle is a manga by Norio Sakurai that ran in Weekly Shonen Champion from 2006 to 2017. After it ended, Sakurai moved on to The Dangers in My Heart.

The manga was adapted into a 13-episode anime by director Masahiko Ohta in 2010, with a 14th episode only available on the Japanese DVD release. A second season, titled Mitsudomoe Zouryouchuu!note  Three-Way Struggle - Getting Bigger! aired the following year, though low ratings and lackluster DVD sales resulted in the season getting slashed to eight episodes.

The show ended up being more popular in America than its native Japan, thanks to Crunchyroll carrying the series for a decade. However the rights lapsed in January 2021 and none of the other streaming services have picked it up, nor has it ever had a home video release, rendering it legally unwatchable.

Hitoha gets up and walks off into the sunset while a dazed Mitsuba hits the floor face-first.

A woman just narrowly misses reuniting with the triplets and their father many years later.

Example of:
Missed Him by That Much

A woman just narrowly misses reuniting with the triplets and their father many years later.