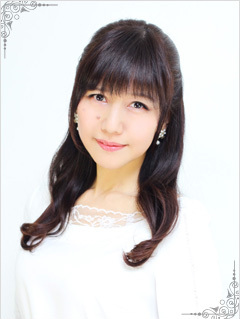 Oi oi... Anyway, Kikuko Inoue (born September 25, 1964 in Yokosuka, Japan) is a voice actress best known for her motherly, dignified, angelic voice, which lends well for her to get picked to play Yamato Nadeshiko, Team Mom, or Onee-sama roles. She also specialized in playing mega-bitches like I-No from Guilty Gear, Grace, Lust, Louise's big sister Eleonore and even a Tokusatsu example (Insarn). She's a member of the Goddess Family Club singing club, and like Megumi Hayashibara, she is also part of the singing club DoCo.

If you think mega-bitches are her only "other" role, how about a Badass Action Mom, to the tune of The Boss in Metal Gear Solid 3?

These notable roles are all 17 years old!note Oi oi!

She always refers to herself in public as "17-years old + XXXX days" even though she was born in 1964 and no longer looks anywhere close to 17. This is used as a Shout-Out in My-HiME with regards to Midori Sugiura's dubious age, by Maria from Hayate the Combat Butler who actually is 17 (but is constantly mistaken for someone older), by Virgilia who obviously isn't 17-years old but is voiced by Kikuko Inoue, in an Umineko: When They Cry preview, and by Shizuka Nekonome-sensei from Rosario + Vampire. Some seiyuu, such as Yukari Tamura (who voices Midori) have also picked up this habit, which is not surprising when Kikuko started the 17-years old religion, and ONLY females can be worshippers, as quite a number of seiyuu have converted.

It's also worth noting that despite being THE seiyuu who's practically become pigeonholed as the archetypical Yamato Nadeshiko, she's often landed with Lethal Chef roles, where said Yamato Nadeshiko isn't so complete due to her lack of quality in producing good, edible food - such examples include Cecile Croomy, Tytti Noorbuck, Sanae Furukawa and Rosemary.

In a strange twist of art imitating life, Kosuke Fujishima (creator of Ah! My Goddess) became so impressed by her portrayal of Belldandy in the first Original Video Animation series that subsequent chapters of the Manga use Kikuko's characterization as the character's base personality, including quirks such as liking sunfish and touching fake food.

As of 2021, according to Anime News Network

, she is the most prolific Japanese female seiyuu, having over 45 more roles than Mamiko Noto, at an astounding 492.

Despite her very common surname, she is not related to voice actors who share the same last name including the late Makio Inoue, the late You Inoue, Kazuhiko Inoue and Marina Inoue. She has, however, worked together with her only child, Honoka Inoue.