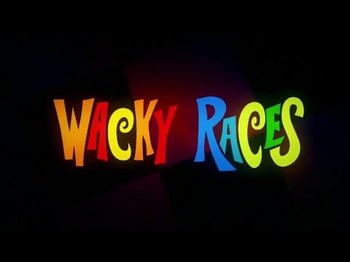 In contrast to the original's formula, this version of Wacky Races is less about the actual races, even if some episodes start out that way. Another big difference is that at the end of each episode, there might be no clear winner (or loser, for that matter), and if there was, it could be someone nobody expects or someone who's not even a part of the race at all. Instead, the show is more focused on what kind of hijinks the racers get into every episode, as well as putting more focus on the characters and their dynamics with each other.

Nevertheless, each race car is still equipped with some sort of weapon or contraption to help them get through a race and of course, Dick Dastardly still tries to cheat his way into the race by setting up traps, sabotaging the other racers, and what have you only to backfire on him (obviously).

Also of note, of the ten racers from the original not including Dastardly himself, only three remained (these being Penelope Pitstop, Peter Perfect, and the Gruesome Twosome), while adding new characters in their place. Three completely new racers come in the form of I.Q. Ickley, a kid genius riding in a hovercraft of sorts; Pandora, Penelope Pitstop's evil twin; and the P.D.Q. Crew, a band of pirate racers. Another reoccurring new character is Brick Crashman, a live announcer who replaces the Interactive Narrator entirely, and P.T. Barnstorm, who manages the races.

First debuted on Boomerang's streaming service in the United States on August 14, 2017 and subsequently renewed for a second season. A third season was also put into production but was never released due to the anti-trust litigation placed on WarnerMedia. Animatics from the cancelled season are available on former writer Mike Disa’s Vimeo page.

The racers stop at an Italian village where the locals insist on offering them feasts every day. By the time they're finally allowed to leave, they're too fat to fit in their cars and have to ride scooters for the rest of the episode's race.

The racers stop at an Italian village where the locals insist on offering them feasts every day. By the time they're finally allowed to leave, they're too fat to fit in their cars and have to ride scooters for the rest of the episode's race.