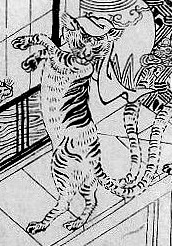 Bakeneko (roughly "warped cat") is a term for cat youkai. When cats live for a long time (or die in a way that spawns a Vengeful Ghost) they are said to develop odd powers such as human speech, placing curses and animating corpses by jumping over them. In some depictions this transformation also causes them to increase in size and develop a taste for human flesh. When they assume human form, it tends to be cruder than kitsune and tanuki — less beautiful Shapeshifting Lover and more Crazy Cat Lady (often based on a real old woman they killed and replaced).

The most iconic type of bakeneko is the Nekomata ("forked cat"), cats who transform into youkai when their tail grows beyond a certain length and splits in two. In some depictions they can undergo this process multiple times, similar to kitsune — the vast majority of these cases have seven tails, a Shout-Out to a youkai said to have plagued the Nabeshima clan.

The Kasha ("fire wheel/chariot"), a Hellfire youkai which steals the corpses of sinners, is usually depicted as either an oni or a nekomata Wreathed in Flames. Possibly a Japanese equivalent of Hellhound.

The Maneki Neko ("beckoning cat") is a benevolent variety which has its own page.

Related to Cats Are Magic, Uplifted Animal, and Ghostly Animals. Subtrope of Multiple-Tailed Beast. See also Asian Lion Dogs for other feline-like creatures that are prevalent in East Asia.