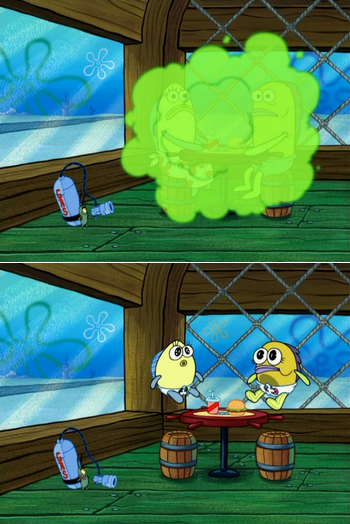 There are easier ways to get a Happy Meal.
Scott: We found him like that.
Sheriff: Where? Swimming in the fountain of youth?!
[...]
Scott: Derek's been aged backwards. He can't remember anything. We just need to talk to him.
— Teen Wolf
Advertisement:

Some form of Applied Phlebotinum results in one or more main characters regressing to an earlier age. It may be the result of a freak accident, a plot on the part of the bad guys to incapacitate our heroes, or done on purpose so the characters can relive their childhood (at least temporarily). It may involve a Physical Attribute Swap with someone younger. Always central to the plot of a Baby Morph Episode, which is Exactly What It Says on the Tin.

For some reason, this plot is often used in Fan Fic where it's called a De-Aging story. Often combined with Raise Him Right This Time.

When it's an actual fountain or similar artifact that exists to restore youth, it's a Sub-Trope of Immortality. These will, of course, be sought out by Immortality Seekers. A downside to this version of the trope is that the fountain is usually stationary and often in a remote region, forcing the newfound immortal to permanently stay close to it or at least return regularly, and to keep it a secret from others due to Immortality Immorality.

When someone dies in his rejuvenated state, expect him to turn back old immediately.

When a Fountain of Youth effect doesn't get reversed and the younger actor replaces the older one in the cast for good, it's also an example of The Nth Doctor.

It's common for characters to overdo it in stories involving this trope, often winding up as babies, or possibly even suffering Death by De-aging. This may or may not be permanent, but if the character in question was a bad guy, expect it to be permanent; well, at least, until they grow back up the old-fashioned way.

If the character's clothes don't change with them in this event (and it's shown onscreen), it's likely to cause Shapeshifting Excludes Clothing. If the event is offscreen and thus a surprise to the audience or one or more characters, Empty Piles of Clothing results. This process may result in an Age-Down Romance when the youthened character gets infatuated with someone of their new age or vice-versa.

Compare Elixir of Life, a Sister Trope with some similarities to this one.

The Trope Namer is the mythical Fountain Of Youth that Ponce de Leon supposedly searched Florida to try and find - although this idea was not actually attached to his name until several decades after his death.

Contrast with Overnight Age-Up and Plot-Relevant Age-Up. Compare Really 700 Years Old, where an individual is vastly older than even the maximum natural lifespan for their species, and looks nowhere near as ancient as they actually are; Merlin Sickness, where the individual's aging progresses in a backwards fashion (i.e. they grow younger rather than older); and Longevity Treatment, where one's maximum lifespan is increased (which does not necessarily come with youth). See also Healing Spring.