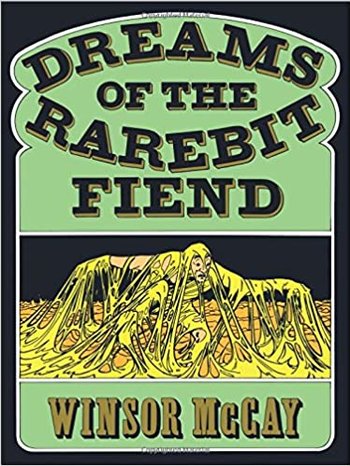 Predating his more well-known comic strip Little Nemo by about a year, Winsor McCay's Dream of the Rarebit Fiend detailed the bizarre dreams had by numerous people after eating a dish called Welsh rarebit, a dish where one spreads a spicy cheese sauce on toast.

The comic has a considerably more mature and adult-oriented tone than Little Nemo, often featuring adults getting into more...well...adult situations (such as drinking too much, politics-related arguments, etc.) during their dreams. The comic is also noticeably more violent than Little Nemo usually gets, as well. (One comic features a man getting blown to pieces trying to cross the street, for example.)

Notably, Edwin S. Porter created a silent live-action short film based on the comic strip, titled Dream of a Rarebit Fiend, in 1906. In addition, McKay himself created animated adaptations of a few strips.

along with Little Nemo.

Dream of the Rarebit Fiend provides examples of: