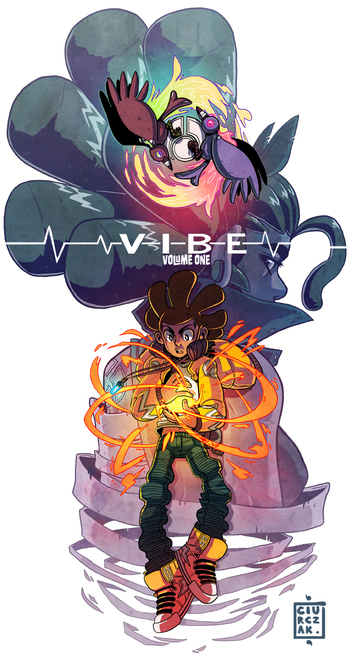 A webcomic by Dan Ciurczak. Find it here

Vibe is about a young witch doctor named Baron Bones. Baron's job is to find people carrying bad vibes around, extract them, and fight the monsters that are formed from them with the help of his three Loa: Ogoun (Loa of fire), Jean Petro (Loa of ice), and Agau (Loa of storms). After his parents die, he and his sister Brigitte were taken in by their aunt. However, after Brigitte vanishes, Baron starts to have nightmares about her. Then, things go from bad to worst when meets a man named Furio, who claims that Brigitte stole a totem from him and tries to get Baron to tell him where she is, claiming that she's back in town.

After discovering Baron doesn't know where she is, Furio manages to track her down on her own, but discovers that she's using the Loa Ghede and has grown dangerously powerful. Baron and Brigitte then begin to track each other down, while Furio struggles to figure out a way to defeat Brigitte and get back the totem. Additional problems arise when one of Baron's classmates is possessed by one of her bad vibes, and Baron struggles to hide the situation from his aunt to convince her he's grown up.