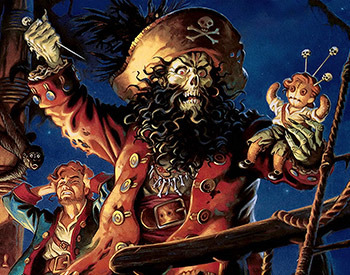 Great for giving your enemies a very annoying migraine.
Morris Bradbury: Time was you had to look a man in the eye before you could kill him. You owed him that.
Phil Lovecraft: Yeah, now with the nerve and a little know-how, you can do it by tyin' six knots and a piece of string. Ain't modern livin' grand?
—Cast a Deadly Spell
Advertisement:

A stock trick in any Hollywood Voodoo practitioner's arsenal is the Voodoo Doll, a tiny figurine or stitched-up cloth doll created to vaguely resemble another person (sometimes using that person's hair or blood) which is then tormented in various ways, such as by being held over a fire or jabbed with needles. As the doll is damaged, so is the person connected to it, making it a wonderful long-range means of revenge.

In reality, so-called "voodoo dolls" are not a part of Vodou at all. They originated in Europe where they were called poppets, just as likely to be used for long-distance healing or simple communication. Vodou's actual use of dolls (which have nothing to do with sympathetic magic) was most likely mistaken for this by European onlookers. And contrary to what Hollywood shows, they aren't just for torture. Some places in New Orleans and Haiti do sell "voodoo dolls" marketed to ignorant tourists, though.

Occasionally Played for Laughs in which the victim jerks around like a puppet when the doll is moved.

Incidentally, there is a real Vodou practice involving sticking nails into dolls, but all they do is nail them to trees to serve as guides to wandering spirits.

If you see someone pounding nails to a straw doll in anime or manga, in most cases it's not Hollywood Voodoo but a Japanese curse ritual called ushi no toki mairi ("Visit to a Shrine at the Hour of the Ox"), so named due to the ritual being traditionally carried out between 1 and 3 AM, which is the Hour of the Ox. The straw dolls involved are called wara ningyo. There are also paper dolls known as katashiro.

It can be considered a type of a Reality Changing Miniature. For another way of taking out frustrations on an image of an enemy, see Dartboard of Hate.

If you had someone like Lois for a mom, you'd want one too.

If you had someone like Lois for a mom, you'd want one too.