Series / Beyond Belief: Fact or Fiction 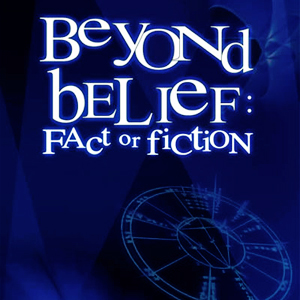 Beyond Belief: Fact or Fiction? (usually shortened to simply Beyond Belief) was an anthology TV show that ran for four seasons on FOX from the years 1997-2002. Each episode featured five short stories that involved unbelievable coincidences or the paranormal, and viewers were challenged to judge which were Inspired by… real events and which were entirely fictional. The show was hosted by James Brolin for the first season and by Star Trek: The Next Generation alumnus Jonathan Frakes thereafter with Don LaFontaine as the announcer. (And yes, he does say "In a world.") Although your mileage may vary as to how seriously one should take the show's claims of truthfulness, it remains a cult favorite and a great source of nostalgia for anyone who watched it during its original run.

"Did Tropey the Wonder Dog really save Captain Space, Defender of Earth! when he was Trapped by Mountain Lions? We got you. It's fiction. We made it up. Not possible. No way. Not a chance. It's false. A total fabrication made up by a writer."