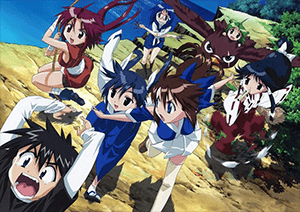 Just his everyday life on an island full of women.note From left to right: Ikuto, Rin, Ayane, Chikage, Suzu, Yukino, Machi. And many more.
"There's no such thing as 'absolutely impossible' in this world!"
— Ikuto Touhouin
Advertisement:

Nagasarete Airantou is a a series of manga written and illustrated by Takeshi Fujishiro. It was later adapted into a 26-episode anime in 2007 by Studio Feel. There's also the light novel version based on the manga.

After a fight with his father, Ikuto Touhouin runs away from home and boards a ship. After falling overboard during a huge storm, he washes ashore on a mysterious island inhabited by only women, with no means to escape. With a guy on the island at last, now everyone is determined to make him their husband.

The Character Page has just been started. Feel free to help.

It has a sister series named Cahe Detective Club, by the same creator, where one of the main cast is one of Ikuto's cousins.