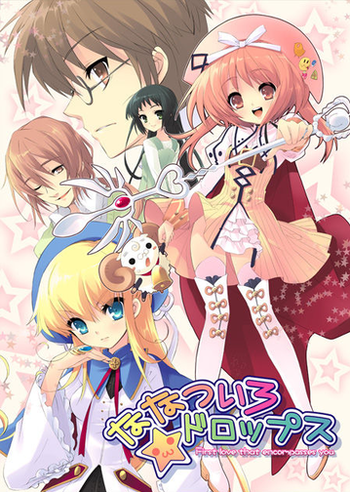 "This is something that happened in the town closest to the first star of the night. The important story of the two of them. Where should I begin?"
Advertisement:

Masaharu "Haru" Tsuwabuki is an introverted Ordinary High-School Student. After going about things as usual he bumps into a masked figure and accidentally picks up a dropped potion of theirs, later drinking it thinking it to be soda. He then finds himself transformed into a lamb, and must collect seven stardrops to return to normal.

Nanatsuiro Drops ("Seven-Colored Drops") is a Visual Novel developed by UNISONSHIFT and released on April 21, 2006. First available on the PC, the game contained adult-only content. It was later ported to the PlayStation 2 by Media Works and released with additional characters but without the adult content on September 20, 2007 under the title Nanatsuiro Drops Pure!!. A similarly censored version for the Nintendo DS was released on May 15, 2008.

Shortly after a Light Novel was adapted from the work written by Tamaki Ichikawa and illustrated by Noizi Ito, published by Enterbrain on June 30th 2006.

This was quickly followed with a Seinen Manga adaptation created directly under UNISONSHIFT and illustrated by Yūki Takami first published by Media Works in September 30th in Dengeki G's Magazine with an ongoing run, currently totaling three volumes. A second Shōnen Manga adaptation also produced under UNISONSHIFT was made under the title Nanatsuiro Drops Pure!! illustrated by Sorahiko Mizusima and again published by Media Works this time in Dengeki Comic Gao!, running from April 27, 2007 to February 27, 2008, culminating in one volume.

Finally, a twelve-episode TV anime was produced by Studio Barcelona under director Takashi Yamamoto with an original run from July 2, 2007 to September 30, 2007. The opening theme is "Shining stars bless☆" by Kaori Utatsuki, and the ending theme is "Mo・o!" by Loverin Tamburin.

An Internet radio show called Nanatsuiro Radio! was also based on the work, starting on April 6, 2007, and published by Media Works.

"For example, when looking at the stars outside the window. For example, when writing in the secret journal about the day. Mysterious things suddenly fall down from the sky. The key to everything are the Stardrops that fall from the sky, and a special girl. It is a magical story of 'a seven-colored first love that encompasses you.'"