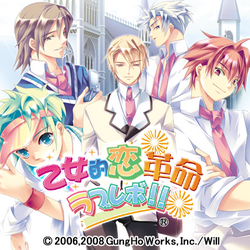 A few of your Bishounens in Love Revo, clockwise from top left: Ayato Kamishiro, Fukami Souta, Kahara Masaki, Ichinose Ren, Tachibana Kennosuke.
Hitomi: Yesterday some people reacted really severely seeing my figure.. ..But passing out only because of eating a little less than usual, maybe I'm too fragile.
Ryutaro: How much less did you eat?
Hitomi: Three cups of rice and two cups of miso soup, fried eggs and grilled fish....
Ryutaro:............
Hitomi: The leftovers of yesterday's pork boiled with sugar, soy sauce, sweet sake and salt and macaroni salad.... Oh, mince cutlet and pumpkin croquette, too.
Ryutaro:............
Hitomi: As a light dessert, ice cream and hot apple pie...I think.
Ryutaro:............
Hitomi: *sigh* This isn't enough for me after all.
(Ryutaro smacks her on the head)
Advertisement:

The heroine, Hitomi, would be an average highschool girl...if you ignored the fact that she literally weighs 100 kg. The game starts with a flashback of heroine's childhood when she used to be a cute young model, but as she grew up she developed a fondness for sweets and junk foods that she got as gifts; her weird siscon Onii-chan encouraging her didn't help matters, and by her 2nd year of high school, Hitomi has become rather round.

For better or worse, Hitomi herself doesn’t really care that much about the issues with her weight...that is, until the day some students from her school come to stay at the same mansion she is living in and coldly reject her attempt to make friends with them by insulting her figure, either directly or indirectly. Receiving a shock from that, she pledges to lose her large build and return to being the beautiful girl she had been way back in the past. With some "encouragement" from the school doctor and her Onii-chan, who has suddenly become very fired up after hearing the story of her humiliation, she sets on a journey to become pretty once again!