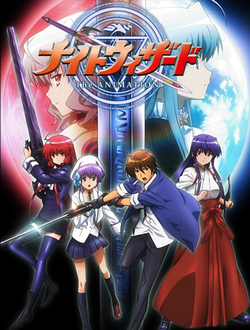 An anime based on a popular Japanese rpg of the same name.

Renji Hiiragi is one of a chosen group of mages known as the Night Wizards. Their job is to make sure that evil doesn't get into our world, keeping it hidden from the eyes of Muggles. This is all well and good, except Renji really doesn't want to do the whole "saving the world" thing, no matter how good he is at it. He has a reputation as "the Falling Man", and is constantly missing class. He wants to make sure that he actually shows up at school and gets work done, but his party's leader Anzelotte just keeps calling him away and not giving him any other choice in the matter.

One day, Renji is told that he will have to watch over New Transfer Student Eris Shiho. Eris is waiting for her birthday, at which point she'll finally meet the Mysterious Benefactor who's been aiding her since she was young. After getting dragged into the Astronomy Club, Eris finds herself joining Renji's party on a quest to recover the seven Jewels that her bracelet is tied to. At the same time, a dark mage — Bell Zephyr — begins to move.

The series aired in fall 2007, with the subtitle "the animation" as it is based on a Tabletop RPG of the same name.