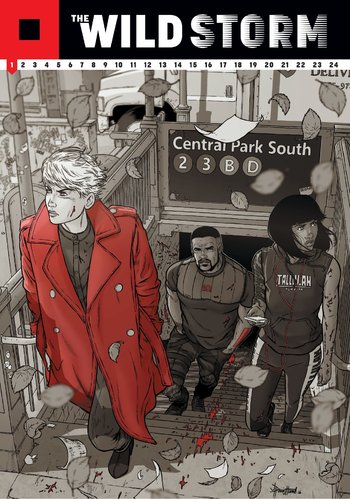 The Wild Storm is a 2017 comic book published by DC Comics, written by Warren Ellis and drawn by Jon-Davis Hunt.

It's an average day in New York City for scientist Angela Spica until she sees a man falling from the top of a skyscraper. Rather than let him die, she utilizes her transhuman implants to transform into The Engineer, catching him in midair and saving his life.

Little does she know, Angela's little act of heroism will have unforeseen (possibly cosmic) consequences, and inadvertently reveal a vast network of conspiracy that she won't be able to hide from.

As suggested by its title, The Wild Storm leads a continuity reboot of the WildStorm universe, which was discontinued by DC in 2010. While many of its characters were thusly imported into the DCU during the New 52, new versions of them are all free to show up in this new continuity as well, according to Ellis, as the universe introduced with this series is separate from the main DCU.

Inspired by the success of Gerard Way's Young Animal imprint, DC approached Ellis to oversee a new line of WildStorm comics; The Wild Storm is this imprint's inaugural title, which ran for a total of twenty-four issues; what happens to it next remains to be seen. The first spinoff of the new WildStorm universe, Michael Cray, was also released in 2017. A second spin-off, a rebooted version of WildC.A.Ts featuring Grifter, Savant, John Colt and Void, was announced for 2019 but was later canceled.

The Wild Storm contains examples of the following tropes: