Brain in a Jar 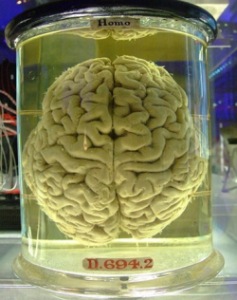 fMRI reading: "99 bottles of beer on the wall, 99 bottles of beer..."
"We are all aware that the senses can be deceived, the eyes fooled. But how can we be sure our senses are not being deceived at any particular time or even all the time? Might I just be a brain in a tank somewhere, tricked all my life into believing in the events of this world by some insane computer? And does my life gain or lose meaning based on my reaction to such solipsism?" — Project PYRRHO, Specimen 46, Vat 7 Subject termination advised
— Flavor Text for the Bioenhancement Center facility, Sid Meier’s Alpha Centauri
Advertisement:

The Wonders of Science can keep a human brain alive in a plastic fishbowl with a few wires and doo-dads running into it. Sometimes this is benevolent, but usually it's nefarious (it may count as a Dark Lord on Life Support, or be the first step towards Unwilling Roboticisation). Occasionally, an underachiever Mad Scientist may need to keep the whole head alive, not just the brain. Sometimes the spinal cord and/or eyeballs are also there.

Sometimes it is presented as the end result of natural evolutionary processes. One day, we may find the rest of our bodies superfluous and exist simply as disembodied brains.

Also frequently falling under this trope is the Poor Man's Substitute of severed heads kept alive in jars or on surfaces that can disguise the fact that the rest of the actor is beneath the table when the head is active, which at least has the advantage of allowing the actor to act in some scenes.

Occasionally with this trope, a virtual reality is put into the brain so that it thinks it's a regular person with a body, making it a sort of Lotus-Eater Machine. See The Other Wiki's "brain in a vat"

article for further discussion of this idea.

It seems that in about one in five examples of this trope the brain will be Hitler's. Walt Disney (or more likely a No Celebrities Were Harmed Expy of him) is also popular. Expect them to be given mobility by being encased in robotic life support units... with Death Rays! For Science!

Keep in mind that in real life, just pulling the brain out of a living person's head and plopping it in a tub of sterile saline would leave you with a starved, dead brain the next morning, so you'd need to hook the blood vessels up to some sort of fluid pump (ala the heart) to keep the brain supplied with oxygen and nutrients. But then you'd also need an air pump (ala the lungs) and nutrient intake device (ala the digestive tract) to keep that fluid pump supplied with that oxygen and nutrients. And then you'd need a regular filtration system (ala the urinary system) to keep the brain from dying of "blood" poisoning. But at this point it all amounts to basically a near-complete prosthetic body, so you might as well attach some limbs and call it a robot with a Wetware CPU, or a Full-Conversion Cyborg.

Compare with People Jars and Man in the Machine; pretty much the same thing, but with complete bodies instead of just a brain. Compare also Soul Jar, in which the more immaterial essence of one's self is preserved. Compare Heart Drive, for a robotic (and sometimes biological) equivalent. Compare with Oracular Head when the head may be preserved by other means and used for answering questions of a divinatory nature. Wetware CPU is a version used as a computer. Compare to Losing Your Head when the whole head is preserved and capable of independent movement. Compare Brain Transplant when the brain is given a new body. This may or may not lead to And I Must Scream. May also be a result of Brain Theft.