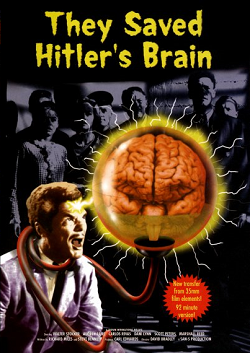 They Saved Hitler's Brain is a 1968 science fiction film. It is about exactly what you think it is: Nazi war criminals preserve Adolf Hitler's brain on a small tropical island until the time is right to resurrect him and, along with him, the Third Reich.

The film was adapted for television from a shorter 1963 movie called Madmen of Mandoras, and lengthened by about 20 minutes with additional footage shot by UCLA students at the request of the distributor.