Film / That Cold Day in the Park 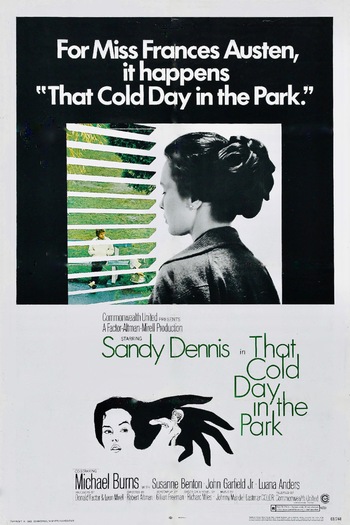 "It is strange knowing that someone else is in the house. I'm so used to being here alone."
Advertisement:

That Cold Day in the Park is a 1969 Psychological Thriller film directed by Robert Altman, starring Sandy Dennis, Michael Burns, and Susanne Benton.

Frances Austen (Dennis) is a thirtysomething woman who lives alone in the huge Vancouver apartment she inherited from her late parents. One day while hosting a dinner party, she spies a 19-year-old boy (Burns) sitting alone in the rain on a bench in the park next to her apartment building. Feeling sorry for him, Frances invites him inside to dry off. He doesn't speak, but she appreciates his company and invites him to spend the night in her guest room. When he awakens the next morning, he discovers that she has locked him in the room.

Though he still accepts her hospitality, the Boy finds Frances's behavior odd. At last he manages to pry open a window and leave via the building's fire escape. We learn that he's not mute at all; he's a middle class kid who splits his time between his family's suburban home and a squalid houseboat where his hippie sister Nina (Benton) lives with her American boyfriend.

Unhappy with that situation, the Boy soon returns to Frances and her apartment, only to find that her concern for him is starting to take a disturbing detour.

Filmed a few months before M*A*S*H, this was basically Altman's first "Altman" film, in which he got to use some of his favorite techniques (improvised dialogue, atmosphere becoming more important than story, panning and zooming, complex female characters) for the first time.