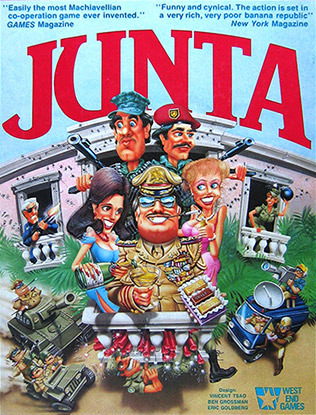 They're bananas, all right.
"Although the United States is, uh, a very rich country and San Marcos is a very poor one, there are a great many things we have to offer your country in return for aid. For instance, there, uh, there are locusts."
— Fielding Mellish, Bananas
Advertisement:

Any backwards Latin American country, usually fictitious, that is ruled by a small corrupt clique.

The terms has its origins in the United Fruit Company

(known today as Chiquita), an honest-to-god Mega-Corp with a Corrupt Corporate Executive approach. With the help of their buddies in the CIA, and some well-intentioned and not so well intentioned American presidents, United Fruit created countless US-friendly military dictatorships throughout the tropics dedicated to growing bananas. In these countries, United Fruit paid extremely low wages and close to zero taxes. As a result, left-wing guerrillas mushroomed all over Latin America, followed by even more US-backed paramilitaries, and thus began a cycle of civil wars and dictatorial overthrows that continued until the fall of the communist bloc.

Since it was usually left-wing guerrillas who opposed the dictatorships note (even though they didn't necessarily establish democratic or egalitarian societies once they got to power; see Cuba, where they did the latter but not the former) in Latin America, such as the 26th of July Movement in Cuba and the Sandinistas in Nicaragua, the term is associated with countries that have governments that are controlled by multinational corporations, and not with just any decadent dictatorship per se. In Europe and the U.S, the connotation tends to fall more closely with that of any dictatorship in any tropical country, capitalist, socialist, or what have you. Although, possible exceptions notwithstanding, there aren't really any left in Latin America these days, they can still be found in Africa and Southeast Asia.

May be called "Val Verde

". As seen below, however, there is a whole catalogue of fictional names for these countries.

Similar to Ruritania, Qurac, Bulungi and Tropical Island Adventure, but easier to fake on a budget. See also Latin Land. A Sub-Trope of The Dictatorship, and closely related to One Nation Under Copyright.

No relation to the clothing brand nor the Banana Guy.