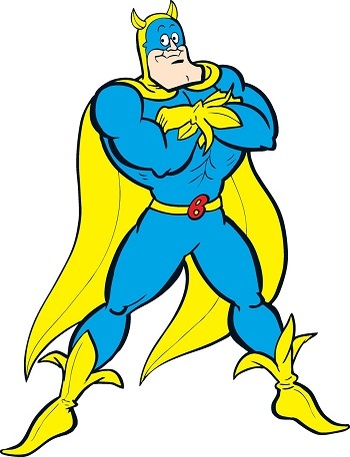 Bananaman is a British comic strip about Eric Wimp, a young boy who could change into a brawny but not terribly bright superhero by eating a banana. Luckily for world peace, his enemies were usually even more incompetent than he was. Originally the back cover feature in Nutty, when that comic folded the strip moved to The Dandy (where much was made of the slight similarity in appearance between Bananaman and Desperate Dan). With the Dandy also having gone out of print in 2012, he now appears in The Beano (with there being some overlap when he was appearing in both comics simultaneously).

During the 1980s, the comics were adapted into a series of animated shorts, which is how the character is best known outside Britain. In the United States, Nickelodeon showed Bananaman as a filler program, often after Danger Mouse.note Which, even with commercials, ended well before the usual 30-minute runtime. The animated series has its own page, so please add tropes related to it there.

There used to be a webpage declaring a movie was in development. Now there isn't. There is, however, a stage musical.