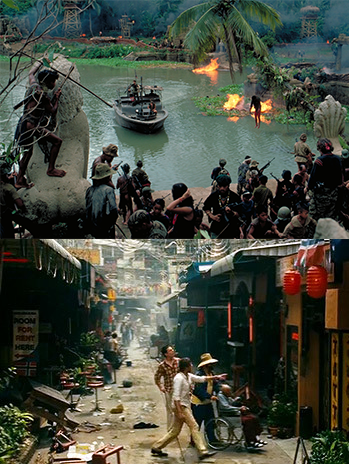 Come for the war-torn jungles, stay for the overpopulated run-down cities.
Well, you'll work harder with a gun in your back
For a bowl of rice a day
Slave for soldiers 'til you starve
Then your head is skewered on a stake.
— Dead Kennedys, "Holiday in Cambodia"
Advertisement:

Southeast Asia is a rich land of many cultures and nations. Myanmar/Burma, Laos, Vietnam, Cambodia, Thailand, Malaysia, The Philippines and Indonesia (and Singapore, Brunei and Timor Leste).

And that's the thing: The West's cultural experience with Southeast Asia is usually limited to the leftovers of The Vietnam War. In the minds of many people outside of the region, Southeast Asia (minus Thailand) is a land of steamy jungles, guerrilla warfare, and all sorts of violence and atrocities. Add vice for taste; affairs between American servicemen and native Vietnamese women are notorious, and it's not for nothing that Thailand has a reputation for sex tourism; as does the Philippines, often a blazing target for high-profile Western pedophiles and cybersex criminals. Furthermore, it appears that Southeast Asia doesn't exist below the sixth parallel - one might get to see the Petronas Twin Towers, but that's about it.

So, when a piece of media goes to Southeast Asia, it usually goes on a Holiday In Cambodia. The setting will either be little jungle villages with wooden huts or cities so seedy they leave marks on the screen. Vice will be both upheld and punished, with the main characters either being told "Me love you long time" by a woman (very often a prostitute) who may or may not have a vagina, or being thrown in some Hellhole Prison on drug charges. If you venture outside the cities, expect your main means of transportation to be a worn-out old Huey or decommissioned River Patrol Boat leftover from "the war", or some sort of ramshackle, shoddily made vehicle "borrowed" from the locals. And someone, some time, is getting a gun in the face. Oh, and there may be elephants.

If you mix this trope with a strong dose of Latin Land and Tropical Island Adventure, a shot of East Indies, and in the major urban areas a sprinkling of Americasia, you'll get something like the Philippines, though for what it's worth, that country is mixed with so many and so disparate cultural influences—owing to nearly 500 years of Western colonialism more pervasive than almost any other country in the region—that it's a challenge to even represent at all, let alone accurately, in most media. Just for one example, there are no ancient temples anywhere in the Philippines—they're all Catholic churches, plus a few mosques left over from the days when Islamic kingdoms ruled there.

For those in the know, it becomes clear that the writers Miss Saigon.

Compare East Indies, which is a little further south, and Far East, which borders this to the north and occasionally overlaps with it.