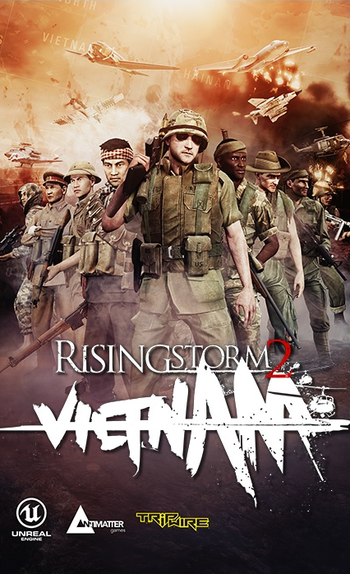 Better Run Through the Jungle~
Advertisement:

Rising Storm 2: Vietnam is a multiplayer shooter set in The Vietnam War that is a sequel to Rising Storm, and thus a Spin-Off to the Red Orchestra series. It was released in May 2017. Initially, the game only had the United States Army and United States Marine Corps as Southern Vietnamese factions facing off against the NLF and PAVN as the Northern Vietnamese factions, but updates have added in Australian forces and the ARVN as well. Rising Storm 2 is the game that has deviated most from the series World War II roots, incorporating period accurate weaponry, pilot-able helicopters, and changes to squad and team mechanics.

Similar to previous games in the series, expect quick and violent deaths, constant scenes of horrific carnage, and an obsession with authenticity rarely matched in other video games.