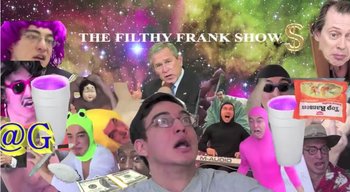 to many of Frank's videos.
Advertisement:

(also called The Filthy Frank Show) is a series of comedic videos/"vlogs" depicting the life and surreal adventures of a man by the name of Filthy Frank, summarized in the description of his main YouTube channel as "everything a person should not be".

Frank has virtually nothing in the way of social inhibition, being the type of person to find pleasure in stabbing baby animals and find the sight of a dead cat to be sexually arousing. He possesses a self-dubbed "Ph.D in Internet retardation", which grants him the authority to examine and satirize any prominent stereotype and trend of the times. Subsequently, he's extremely knowledgeable when it comes to memes, and has done a great deal to support the Fountain of Memes that the series produced.

While the show was generally built video by video, with Frank ranting on a certain topic, it also branched out into a wider lore that grew increasingly detailed as the show went on. In said lore, the show takes place in the Frank-Verse, composed of a variety of different realms traveled through frequently by a multitude of characters, the vast majority of which are played by Miller. The main hub realm is the Nairobi Desert, where Frank has an apartment that he makes his videos in. While Frank and co. go on many a misadventure, the ever-looming threat of an entity known as the Dark Lord Chin Chin always stalks the Frank-Verse, bringing destruction and terror everywhere it goes.

The show is truly surreal, frequently indulging in Stylistic Suck and Random Events Plots. It's also rife with every form of vulgar and crass comedy you could think of, considering Frank sees himself as an Equal-Opportunity Offender (what with his whole mindset that everyone is fair game for mockery). As a result, the show falls through the floorboards of "offensive" as well as several more floors beneath that.

However, as much of a draw as the show's over-the-top nature was, it would be remiss not to mention how, despite the genuine following he gained on the Internet, the character of Frank was conceived by Miller as the exact inverse of a role model and, by extension, a parody of social media's effects on modern culture. As the show's main channel description claims, Frank's exaggerated prejudice and depravity display the absurdity of both traits in normal people, and the degree of his success with his excessive personality highlights the ease with which outrageous and off-color content can gain traction online. Granted, said description also ends with the sentence "OR MAYBE IM JUST FUCKING RETARDED.", so perhaps take this argument with a grain of salt.

After seven years of being active, the show went strangely quiet after the release of the Francis of the Filth book, which addressed the show's lore in its entirety. Three months after the book's release, Miller finally broke the silence to officially announce

that he was done with both the Filthy Frank show and comedy as a whole, citing his loss of interest in the show (specifically that he no longer enjoyed making the videos) and the severe effects that the show had on his health (including throat tissue damage, presumably from years of doing the Frank voice).

As abhorrent as the show's premise sounds, it carved out an impressively large niche on the Internet, and has one of the most dedicated followings a YouTube series has seen (for better and for worse), even in the years following its ending. Because of the nature of this show, it's a given to say it is INCREDIBLY NSFW.

Though the series is retired, a more low-key and story-focused spinoff and/or Spiritual Successor can be found in bald internet man,

starring Lake Markham (the man who played the character Dade).

, which has received mixed but mostly positive reception. With the new creator being able to replicate Frank's humor and even the classic vocal-cord damaging voice rather well, but critics of it saying that it doesn't have the same feel as the original.

Frank was also part of a group called "The Shrimpson Boys" or "The Cancer Crew", that engaged in wild, vulgar, extremely homoerotic, and often dangerous antics that even the Jackass guys would shake their heads at on each others' channels. The other members of the group were HowToBasic, Maxmoefoe

. Another person they worked with frequently is Anything4Views

The Filthy Frank character sheet can be found here, with the creator of the show having several different hubs:

Pink Guy also has a music career. He released a self-titled album

in May 2014, and he released a second album named PINK SEASON

Through this show, Miller also started the Harlem Shake craze.

Welcome to the trope fields, muthafucka!

Music related to the show includes examples of the following tropes: