WARNING: The tropes in this article were contributed by trained professionals. So for your safety and the protection of those around you, do not attempt to submit any of the tropes you are about to read. 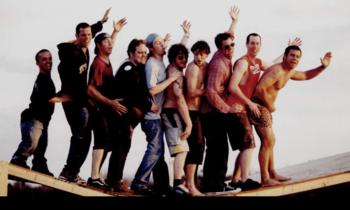 A reality comedy TV series that aired on MTV from 2000 to 2002, and an invaluable slice of American pop culture for the decade to come, Jackass ran on the format of each episode being a compilation of segments featuring the show's cast of nine "stuntmen, skateboarders and all-around lunatics" performing pranks and stunts on themselves, each other, and — through hidden cameras — the public. These segments range from juvenile to humiliating to gross to borderline torturous to mixes of some if not all of the four. It's pretty evident that if these guys weren't such close friends, they'd be way too busy hating each other's guts.

Jackass has roots in skateboard culture through the magazine Big Brother, headed by series director and co-creator Jeff Tremaine, as well as the "Camp Kill Yourself" (or CKY) humor/stunt video series of castmate Bam Margera. Its point of origin was eventual cast leader Johnny Knoxville (then a struggling actor and Big Brother writer) pitching an article about becoming a human guinea pig for various self-defense weapons — which culminated in Knoxville getting shot in the chest to test out a bulletproof vest. Tremaine and his editors, upon filming test footage, found it so funny that the rest of the staff (including Knoxville, Dave England, Chris Pontius and Steve-O) got in on recording similarly masochistic videos.

Media Watchdogs and Moral Guardians more or less had panic-induced heart attacks at the very thought of their kids watching this show, let alone being influenced to copy its stunts, and their outrage resulted in a huge movement to get the show canned (which, ironically, may have increased its popularity).

The format proved popular enough to spawn a video game and a series of movies that allowed the gang to perform stunts and skits not possible on MTV, with all of the movies save for the first receiving companion movies of their own consisting of unused footage from their productions. A handful of movies was also released under the Jackass Presents label: a tribute to the then-recently deceased Evel Knievel, and the Borat-esque hidden camera comedy Bad Grandpa, which is the first Jackass film to be nominated for an Oscar. Yes, really. (For makeup and hairstyling, but a nomination nonetheless.)

Three films (the third in 3D) were released four years apart between 2002 and 2010, and a fourth film, titled Jackass Forever, was released on February 4, 2022. Apart from Ryan Dunnnote who passed away in a car accident in 2011 and Bam Margeranote who was confirmed not to be in the film due to ongoing substance abuse issues, though he still appeared in one scene that had been shot prior to his firing, the film features the rest of the original crew as well as a handful of new recruits. Although the team has grown reputations of being Made of Iron, serious medical concerns have persisted over how much more their aging bodies can take, and Knoxville has confirmed that Forever will be his last Jackass movie.

Several cast members also received spin-off shows, ranging from Bam Margera's Viva La Bam to the spin-off Wildboyz, which featured Chris Pontius and Steve-O traveling to exotic locations around the globe and performing stunts, getting hurt by wildlife, and trying bizarre local customs. Some footage shot for Wildboyz would end up being repurposed for Jackass Number Two and Jackass 2.5.

Not to be confused with Jerkass, although they are jackasses for a different reason.

Hi, we're TV Tropes, and we associate the following tropes with Jackass:

REMINDER: The tropes in this article were contributed by trained professionals. So for your safety and the protection of those around you, do not attempt to submit any of the tropes you have just read.