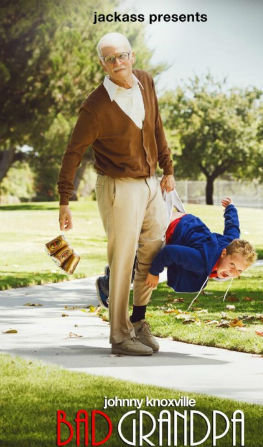 A 2013 comedy/hidden camera prank film, starring Jackass alum Johnny Knoxville, and the first, and currently only, film to be released in theaters under the Jackass Presents banner. It is based on a character previously seen in the previous three films in the series; like the later 2, it also has enough extra stunts recorded to fill an entire separate film, which would see release (like the previous "extra stunts" films, branded as Bad Grandpa .5) the year after the original.
Advertisement:

Curmudgeonly old coot Irving Zisman has just received some tragic news. His wife of 40 plus years has passed away... and Irving couldn't be happier. He's a free man for the first time in decades, and he's going to enjoy every second of it. But fate throws a monkey wrench into this plan. Irving's daughter is headed to jail (again) for drug charges, leaving her 8-year-old son Billy with nobody to take care of him. So, much to his dismay, Irving has to haul Billy across the country to North Carolina, and drop him off with his scumbag dad. Along the way, Irving finds himself oddly growing attached to Billy, and vice versa.

It now has the noteworthy achievement of being the first and so far the only Jackass film nominated for an Academy Award, in this case for Best Makeup And Hairstylingnote  which it lost to Dallas Buyers Club.

Not to be confused with Dirty Grandpa starring Robert De Niro.