Film / Indiana Jones and the Kingdom of the Crystal Skull 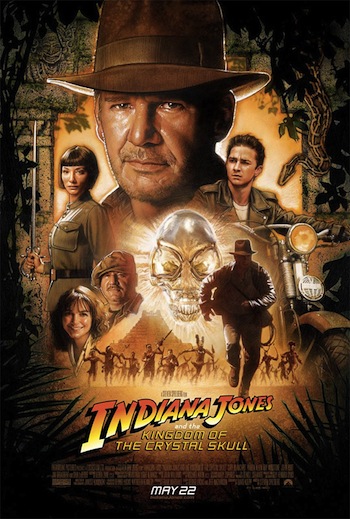 The fourth film in the Indiana Jones series, released in 2008.

Kingdom of the Crystal Skull is set 19 years after the previous installment, during the Cold War, and begins with Indiana and his colleague, George 'Mac' McHale (Ray Winstone) being captured by Russian soldiers seeking a powerful artifact that the U.S. government is holding. Although the Russians, led by Irina Spalko (Cate Blanchett) obtain the artifact (a Crystal Skull of unknown origin), Indy manages to escape after a harrowing experience at a nuclear testing site in Nevada.

The FBI, paranoid of Russian infiltration, accuse Indy of being a collaborator with the Russians, and the allegations force out of his long-term teaching career. Just when he thinks his time as a teacher and archaeologist is done, Indy meets a leather-jacket-wearing young man named "Mutt" Williams (Shia LaBeouf), who convinces Jones to go with him to South America and help him find an old friend.

Indy and Mutt's journey eventually lead them to reunite with Indy's old lover, Marion Ravenwood (Karen Allen), who had also been kidnapped by the Russians, and Professor Oxley (John Hurt), Jones' close associate who discovered the artifact and went slightly insane as a result. Now, reunited with Marion and accompanied by Mutt, Indy sets out to discover the secret behind the crystal skull, leading him on an adventure both familiar and entirely new.

Kingdom of the Crystal Skull was finally put into production after having various ideas floated around in the 1990s. The film took inspiration from the pulp science fiction stories of the 1950s, and was set during the Cold War. The film also featured a score by John Williams and creature effects by Stan Winston (in one of his last projects).

A fifth film has begun shooting after a long stint in Development Hell, set to be released in 2023 with Harrison Ford reprising his role as Indy alongside new castmates Phoebe Waller-Bridge and Mads Mikkelsen. While key details are unknown, the movie is meant to be the final film in the series, or at least the last one that stars Ford as Indiana Jones. James Mangold (Logan, Ford v Ferrari) takes over the directing reins from Spielberg, who remains as a producer. It will be the first film in the series released by Disney (who purchased Lucasfilm in the interim) rather than Paramount.