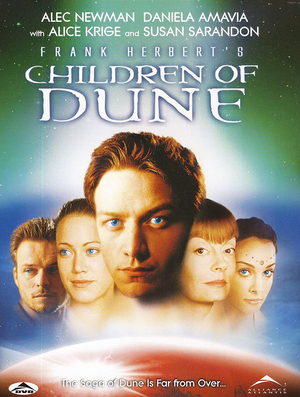 History is written on the sands of Arrakis. A chapter has ended, swept away by the whirlwind. One door has closed, but another has opened. And on the other side... our future...
— Ghanima Atreides
Advertisement:

Part one takes place with Paul now secured on this throne, after a 12 year long jihad by the Fremen has brought the entire galaxy to heel, killing billions. Secretly a conspiracy is formed against the Emperor consisting of Reverend Mother Gaius Helen Mohiam of the Bene Gesserit; Irulan, Paul's wife, Bene Gesserit, and daughter of the deposed Emperor Shaddam IV; The Spacing Guild Ambassador Edric, a Guild Steersman and the Tleilaxu Face Dancer Scytale. The Spacing Guild introduces the ghola of Atreides Swordmaster Duncan Idaho, who has been secretly programmed by the Tleilaxu. Irulan, on instructions from Mohiam, introduces contraceptives into Chani's diet to stop her from conceiving an heir for Paul, a role she feels belongs to her as his wife. This causes Chani to pursue a ritual Fremen high spice diet to help her fertility. Paul is blinded by the explosion of an atomic Stoneburner, but is able to see via his oracular vision. Chani is pregnant but the trap continues to close on Paul. Because of the difficult pregnancy, Chani dies in childbirth, triggering the Duncan Idaho ghola's programming to kill Paul, but Paul overcomes him with the help of the recently born Leto II, who is pre-born due to the high spice diet. Paul can no longer see, so per Fremen tradition, he walks off into the desert.

Parts two and three Time Skip to when Paul's twins are teenagers. Paul's sister Alia rules as Regent, but she is becoming ever more paranoid and her high spice intake is making her prone to possession by her ancestral memories. The Lady Jessica comes back to Arrakis as an agent of the Bene Gesserit to assess the condition of both Alia and the twins, all three of whom are pre-born and therefore more prone to possession. The Corrinos are planning a plot to assassinate the twins using trained tigers. As Alia descends into madness, Leto uses the Corrino threat to fake his own death in order to follow what he sees as the Golden Path. He falls into the hands of rogue Fremen from Jacarutu who wanted him to go mad like his aunt Alia by feeding him saturated spice. Gurney Halleck, acting on Jessica's behalf, goes looking for clues about Jacurutu via his smuggler contacts from the days when Arrakis was under Harkonnen control. Jessica in the meantime has escaped to Selusa Secundas after Alia tries to have her killed, and is training the Corrino heir Farad'n who will be wed to Ghanima. Leto, having survived the spice trial, merges with the sand trout to become a demigod-like being, augmenting his speed and strength. He returns to take his rightful throne from the now fully possessed (by the Baron Harkonnen no less) Alia and leads humanity down the Golden Path.

One door has closed — but another has opened. And on the other side... our future.
Feedback