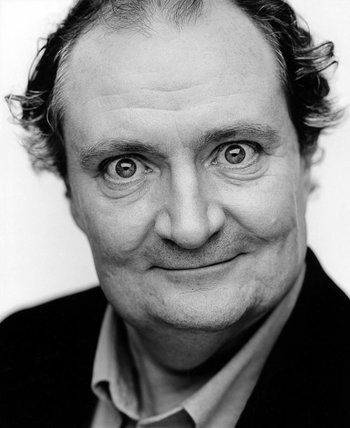 "I do always like to do things I haven't done before, so I'm always looking out for things in a different genre, or a different sort of character."
Advertisement:

A familiar face on British stage and screen for many years, he gained international fame with his performances in Iris and Moulin Rouge!, which respectively earned him an Academy Award and a BAFTA. He is also known for playing Bridget Jones' father in Bridget Jones' Diary and its sequels, and Horace Slughorn in the Harry Potter series.

In an interesting case of What Could Have Been, early in his career Broadbent turned down the part of Del Boy in Only Fools and Horses, which proved to be a Star-Making Role for David Jason. Broadbent did subsequently have a few memorable cameos in the series as Dirty Cop Roy Slater.