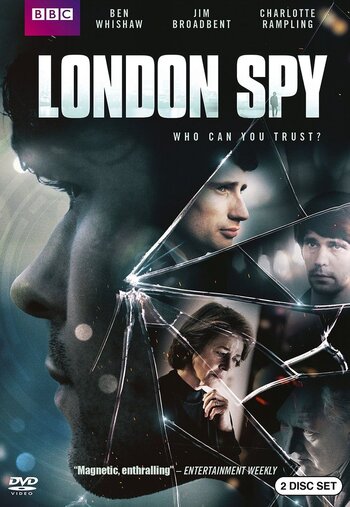 London Spy was a 2016 BBC mini-series, starring Ben Whishaw. Set in modern day London, London Spy follows the story of a young man named Danny Holt, played by Whishaw, as he is dragged into a world of spies and danger while seeking answers about what happened to his murdered lover, possible intelligence agent Alex, played by Edward Holcroft.

As The Other Wiki describes it: "Danny is gregarious, hedonistic, and romantic and falls in love with Alex, who is asocial, enigmatic, and brilliant. Just as they discover how perfect they are for each other, Alex disappears."

The first episode explores the beginning of their love story. Danny is a down-on-his-luck twentysomething, spending his nights in a haze of drugs and drinking. While stumbling home one night he has a run in with a jogger, who sees he is in distress and lends him his water bottle, before jogging away again. Enamoured with him, Danny returns to the bridge the next few nights, intent on returning the bottle. He eventually finds the jogger again, who introduces himself as ‘Joe'. The pair connect, and start dating. As the episode progresses, we see them fall in love over the course of a few months. Joe eventually reveals his name is really Alex, that he works at a bank, and that his parents are dead. He is often reserved, very lonely, evasive about his job, and clearly a genius.

Near the end of the episode, Alex abruptly disappears. For the next few days, Danny is unable to contact Alex, no matter what he does, until finally one night he is mysteriously led to a key to Alex's flat.

Danny visits the flat, and discovers Alex's dead body locked in a trunk in a hidden attic. He is arrested by the police, who inform him that his DNA was all over the scene, and furthermore that the man he knows as Alex is actually called Alistair, that he does not work at a bank, that his parents are in fact alive, and that he was very likely a spy, throwing their entire relationship into doubt.

Over the course of the next few episodes, along with the help of his aging friend, and ex-MI6 agent, Scottie (Jim Broadbent), Danny must unlock what Alex was working on that got him killed, find out who killed him and why, deal with Alex's deceitful and manipulative mother, evade the Security Services' efforts to completely wreck his life, and most importantly decide whether or not Alex ever really loved him, or if it was all a lie.