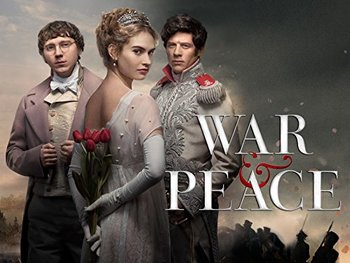 "We must live. You know, we must love. And we must believe that there's more to it all than our lives on this scrap of earth."
— Pierre Bezukhov
Advertisement:

The 2016 miniseries adaptation of Leo Tolstoy's War and Peace by The BBC. This is the network's second television adaptation of the novel, following one in 1972. It was written by Andrew Davies and directed by Tom Harper.

In addition to tropes inherited from the novel, this show exhibits examples of: