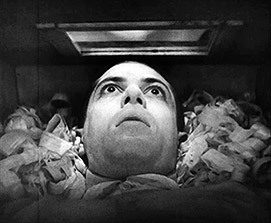 I wonder what my body would sound like
Slamming against those rocks
And when it lands
Will my eyes
Be closed or open?
— Björk, "Hyperballad"

On the big or small screen, if someone falls over motionless with their eyes wide open, it is a sure sign that they are dead — not unconscious, not capable of being resuscitated, but dead for good. In real life the position of the eyelids means nothing; people can pass out or fall asleep with their eyes open.

Additionally, dead bodies always have their eyes either closed or all the way open, with no middle ground. (Again, this stands in contrast to reality, but nobody wants a dead body making a weird face and it's hard for an actor to have half-closed eyes without flickering.) In the latter case, someone who knew the deceased will often come along and manually close the corpse's eyes for "respect" or "dignity". This is always done the same way — using the palm flat open, they pass their hand over the dead person's face, somehow closing their eyes.

In old times, the friend would also put two coins over their closed eyes as well, to "pay the boatman" to take them across the river Styx into the afterlife. See Due to the Dead.

The above is universally true of live-action, but Anime occasionally depicts someone fainting with open eyes or dying with half-closed eyes. Open-eyed deaths in anime often have the iris/pupil area of the eye drawn as a dull grayish spot. In Western Animation, death is rare, visible dead bodies even rarer, and open-eyed corpses almost unheard of. You can blame the Animation Age Ghetto for that.

If they're Not Quite Dead, expect to see their eyes open. Otherwise? He's Dead, Jim.

Note that — perhaps because of Partly Cloudy with a Chance of Death — frequently it rains into the eyes. That is the clinching proof of death.

If a character's eyes close when they die, it's Big Sleep. If they're just asleep, see Sleeps with Both Eyes Open.

As a Death Trope, several spoilers will be unmarked ahead. Beware.