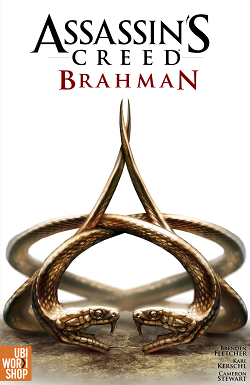 "He who owns this diamond will own the world, but will also know all its misfortunes. Only God, or a woman can wear it with impunity."
Advertisement:

The comic follows Jot Soora, a computer programmer for MysoreTech, a Indian technology company secretly controlled by Templar front Abstergo Industries. While working a virtual reality system, Jot discovers he and his fiancé Monima Das are descendants of two 19th century Assassins: Raza Soora and Arbaaz Mir. When their genetic memories are uploaded to Abstergo's cloud server by the device, they become embroiled in the ongoing conflict between the Assassins and the Templars, while in 1839, Arbaaz and Raza work with Pyara Kaur, a granddaughter of Maharaja Ranjit Singh of the Sikh Empire, to keep a Piece of Eden out of Templar control.