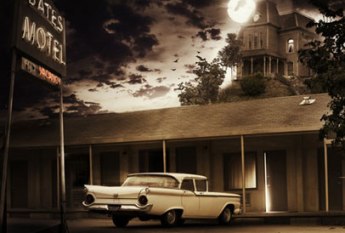 A lovely family establishment.
"Hotel rooms are lonely. All the craziness that you avoid in the day-to-day business of life come to you in hotel rooms and eat your mind. The people they find dead in hotel rooms wouldn't have killed themselves at home. Hotel rooms don't care if you live or die."
— Foxglove, Death: The Time of Your Life
Advertisement:

Know the Haunted House? Well, this is similar: a hotel that is scary. Often, it's abandoned, and if it isn't, you have a good chance of being killed by your host. Similar to Abandoned Hospital and Inn of No Return. The No-Tell Motel may be one.

This trope stems mostly from the fact that many hotels, even the really nice ones, have an underlying disturbing feel. Like hospitals, they're insanely clean and kept in perfect order, giving the entire facility a sterile, inhuman atmosphere. Every room and floor is identical or near-identical, like a lavishly furnished chicken coop. It's so quiet, the employees are always smiling or out of sight, and the rooms are always tidied up when you're not looking. Then there's knowing you're far from home where no one will notice if you disappear.

While hotels are certainly disturbing by themselves, it gets even worse when they're NOT what a hotel should look like (dirty, disorganized, etc.).

Sometimes characters in a series aren't completely stupid. They know something is wrong with this hotel — maybe the guy at the front desk is more than a touch creepy, or they've overheard the townspeople talk about how they hate outsiders, or that the hotel is supposed to be almost fully booked but no one is around.

But they all know that they don't have a choice. Staying in a hotel with a lockable door is much more preferable than taking their chances sleeping in the car, or maybe they don't have a car at all. Maybe they even outright know that something might try to get them during the night, but staying outside is pure suicide. Either way, they're taking those room keys with a quiet sense of dread.

Characters with these suspicions are usually smart enough to remain wary as they settle down for the night, but sometimes they'll completely forget and decide to take a long shower.

Title is the name of an obscure They Might Be Giants song. Like, obscure even for them.

Not to be confused with a Hotel Hellion, or Hotel Hell, a Gordon Ramsay series in the style of Kitchen Nightmares (which, curiously, uses another obscure song as its Title Theme Tune, but one called "Hotel Hell" instead of "Hell Hotel") in which he solves the problems of ailing hotels, though some of the hotels featured may be approaching this level. There's also the equally obscure haunted house of the same name from Universal Studios' 1997 Halloween Horror Nights. Also, not to be confused with when Hell is a hotel, which is Mundane Afterlife.