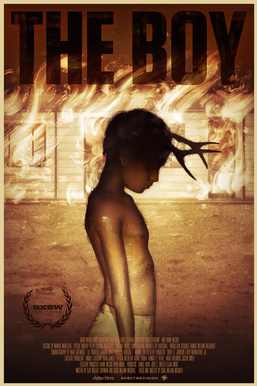 We Hope you have enjoyed your stay
Advertisement:

The Boy is a 2015 American horror film directed by Craig Macneill, written by Macneill and Clay McLeod Chapman, and starring Jared Breeze, David Morse, and Rainn Wilson. It was based on a short film by Macneill and Chapman, Henley, which was in turn loosely inspired by a novel written by Chapman, Miss Corpus. Breeze plays the titular boy, a budding serial killer (Ted Henley), and his father operate a floundering family business—The Mt. Vista Motel. It’s just the two of them since Ted’s mother ran off with a guest years earlier, stealing the motel’s soul and one of its last regular patrons. Since then, Ted’s father has drifted into despondency—becoming a living ghost, haunting his own motel and leaving Ted to fend for himself. In his isolation, unchecked by the bounds of parenting, friendship, or affection, Ted's fascination with death awakens with destructive consequences.